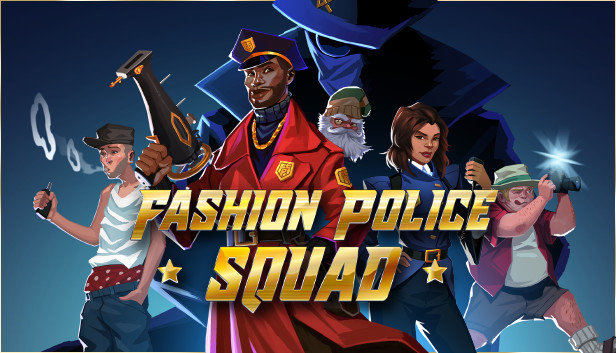 Fashion Police Squad is the latest in the boomer shooter craze, but while other games go for the dark and gritty, this game goes for glitz and fashion. A game that fully commits to its tone and aesthetics, I just wish the outfit was just as functional as it is fashionable.

You play as an officer of the fashion police, when bad fashion trends appear it’s up to you to make things stylish. Everything about the game’s aesthetic helps Fashion Police Squad stand out — areas are bright, colorful, and you have a narrator who says stylish words after every fight.

While this game may look retro, its major inspiration is oddly enough Doom Eternal. Every enemy is a fashion criminal with something wrong with their clothes, surprisingly there are no “white after Labor Day” crimes in the city. To deal with each fashion disaster, you need to use one of five different weapons. Each weapon handles a specific kind of enemy, with some enemies requiring multiple weapons to deal with them in different stages. All the weapons handle nicely with a few having a secondary attack to give them more options. You also have a belt that you can use to stun, attack, and even grapple around the areas with, and your “fab glove” that acts as a super attack once fully charged.

The levels follow the same kind of structure of Doom Eternal with sections that focus on combat in arenas and those about platforming around. You can also find secret fashion posters and collect items. The variety of content with boss fights and non-shooting sections does help the game as the regular levels do start to feel repetitive.

The charm is certainly on full display, but Fashion Police Squad can’t quite stick the landing when it comes to the end.

While I did play the game on the hardest difficulty, that didn’t change the fact that the game’s design lead to some difficulty spikes as you enter the back half. Bosses and enemies are good at tracking the player and your base speed is often not enough to get out of the way of certain attacks. One of your guns does allow you a speed boost while aiming it at the ground, but that is not always feasible due to the design of the encounters. Most enemies attack by a physical projectile you can dodge, but there were two that used hit scan attacks that were almost near impossible to dodge their actual attack in some areas.

Due to the enemies being designed around specific counters, if you try to attack one with a weapon other than their weakness, they will just shrug it off. This is different from Doom Eternal where even though enemies had their weapon weaknesses, they could still be hurt by anything. Here, it felt a bit repetitive to approach every encounter without a lot of flexibility in tactics. Besides the secondary functions, your weapons do not gain any kind of customization or additional abilities. The game really leans into small rooms for its arenas in the final quarter, which makes it even harder to properly dodge and hit enemies. There were multiple situations where I was attacked by an enemy entering a small area without any warning or means to get out of the way due to the limited area. The enemies tend to bunch up and if you’re trying to specifically target an annoying one, it’s more than likely their friends are going to get in the way and block those shots.

To the game’s credit, they do introduce new elements and enemies all the way to the final stage, but the charm started to wear out by the final two stages and the very long final boss fight.

Fashion Police Squad proves that you can make a great FPS without the use of demons, blood, and various shades of browns and greys. While I wouldn’t rank it as high as Doom Eternal or Ultrakill, it’s a great first game and concept for hopefully more seasons of stylish shooting in the future.

This was played with a press key provided by the developer