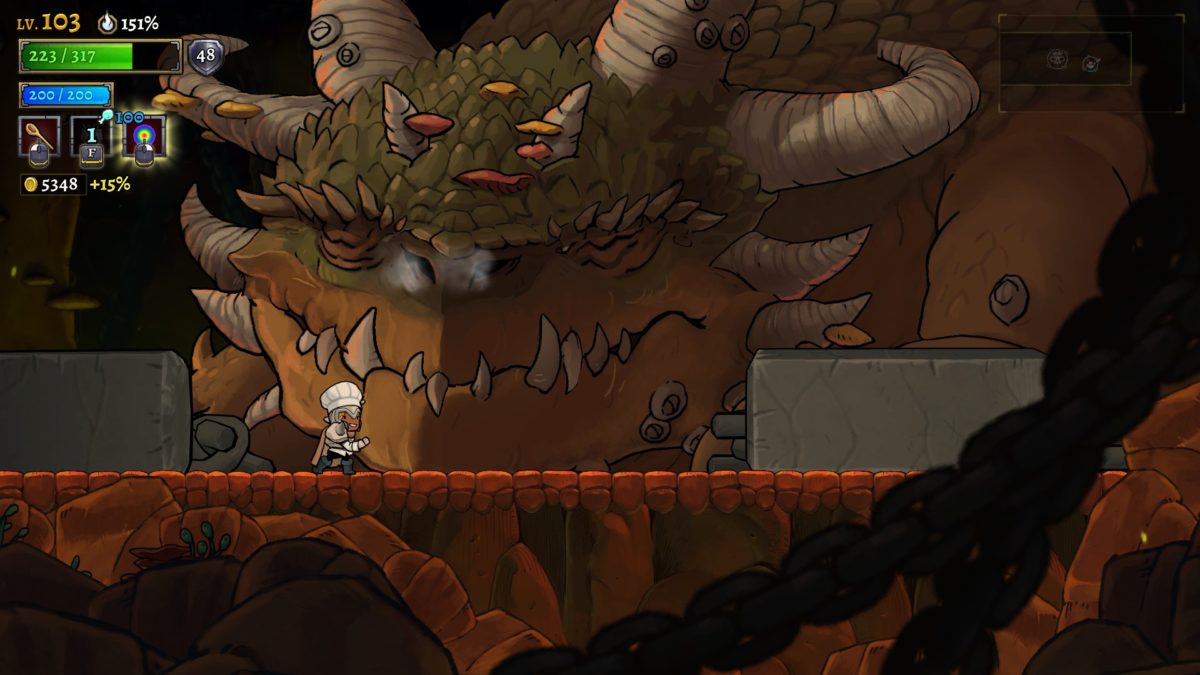 Rogue Legacy is the game that popularized what would become the sub-genre known as “roguelite” — the idea of having a focus on persistence as progression in a roguelike. Since its release, the roguelike and lite genres have blown up across the board. With all these new flavors, Rogue Legacy 2 has recently left early access and now asks the question: can the original roguelite show these newcomers some new tricks?

The basic gameplay of the original returns with a new story. A Kingdom has fallen to a mysterious corruption, the guardians have been taken over by a strange force, and you once again sign away your life and your descendants to Charon to figure out what’s going on. The upgraded visuals are impressive, with improved lighting that makes everything pop.

If you missed the first one, the progression of the game comes in the form of your estate/castle. Gold, earned by killing enemies and finding treasure chests can be used after a run to add additions to your castle. These additions become progressively more expensive, but they will unlock new classes, raise stats, add new quality of life features, and more.

In runs, you can find blueprints that can be used to acquire new equipment pieces with a set bonus for wearing them all. Unlike the first game, your major improvements this time come in the form of heirlooms that are placed in each biome. Once unlocked, they stay active for the rest of the game. Runes, that offer passive bonuses, are still locked to completing a variety of puzzles and mini challenges throughout the world. A new unlock is in the form of “scars” which are bonus challenges whose resources can be used to unlock additional features and boost your stats even higher. The roguelite nature of Rogue Legacy 2 is on full display, and I can just see people attempting level 1 challenges or “low level” runs.

A new resource “resolve” acts as a reserve used to equip relics that provide a variety of passive bonuses that can be found in a run. Once your resolve gets less than 100, further drains will reduce your max health. These relics can be worth it and with the right ones can easily break a run.

Class diversity has been given a facelift with more classes, more special powers, and of course, more whacky traits. The traits were a big part of the original’s charm, with characters having traits that affect their run but can also earn you more gold for taking them.

Of the variety of action roguelikes I’ve played, both Rogue Legacies feel the most inconsistent in terms of movement and combat for several reasons.

While it may not look like it, there are aspects of bullet hell in both games in how you must dodge attacks. Many enemies can launch all varieties of projectiles at you, some that track, some that can go through walls, etc. One of the biggest annoyances with the game is the lack of standardized alerts about oncoming attacks.

Some attacks the game will warn you that the enemy is about to do them, others they won’t. The same goes for incoming projectiles off-screen — some of them the game will let you know, other times you’ll get hit with no warning. It becomes very frustrating when you are trying to keep track of things and you can have three different projectiles and no way to tell how they behave. You have no invincibility frames while dashing (only one class gets an I-frame dodge), and it’s very common to have a situation where dodging one attack puts you right in front of another.

The enemy physics is one of the most frustrating aspects of the game, to the point that I’m glad that there is an assist option to disable damage when coming in contact. Many classes have attacks that don’t push the enemy back when you hit them. This can lead to issues of enemies that you’re trying to attack, and they just fly or dash straight into you and do damage. For classes that can crit off dash attacks, it is far too risky to use this move on the later areas as you’re increasing the chance of you taking more damage.

Since enemies don’t respond to attacks, you can dodge all their projectiles, get into melee range and start hitting, and they’ll launch an attack with no tell and hit you without any means of dodging. Many of my deaths came from situations where it felt like the game was just not giving me a way to succeed — rooms where projectiles come from all angles, with enemies of varying tells, that all hit like a truck if I run into them or their attacks. I found that range attacks can break the difficulty in a lot of the later areas simply by not having to try and duck and weave around projectiles while trying to hit enemies.

Rogue Legacy 2 is certainly a roguelite and is by far one of the most grind-heavy out there. Every form of progression will take time to gather the necessary resources to upgrade. As with the first game, the general positioning and difficulty of the biomes don’t change, which means that your best way of grinding resources is to always go to the hardest area you can in order to maximize the gold you find. Just like with the first game, and with roguelites in general, you’re going to have a lot of throwaway runs that are just there to grind resources before having your “serious runs.”

The biggest hurdle to progress much like the first game is just how tanky the bosses are. Expect to spend a lot of minutes dodging the same patterns as you whittle down their health bars. A new feature that allows you to gain bonus damage requires you to hunt down clues in each biome. Damage is the most important stat, as killing enemies fast prevents them from firing back at you obviously. Because the cost of all upgrades gets progressively more expensive as you spend, it’s very easy to make things harder for you by getting upgrades that aren’t directly helping you but increasing the cost of everything else (the game has been patched with a recommended upgrade path). For people who do finish the game, there is an extensive array of post-game content and progressive difficulty if you really want to keep the rogue-lite-ness going.

Rogue Legacy 2 is the bigger, better-looking version of the first game. If you enjoyed the first game through and through, this is certainly more to love. If you were hoping for some refinements to the design and pain points, then this action family tree simulator still has some thorns to deal with. This is still the quintessential roguelite on the market and a must-play for fans of the original.

This was played with a press key provided by the publisher