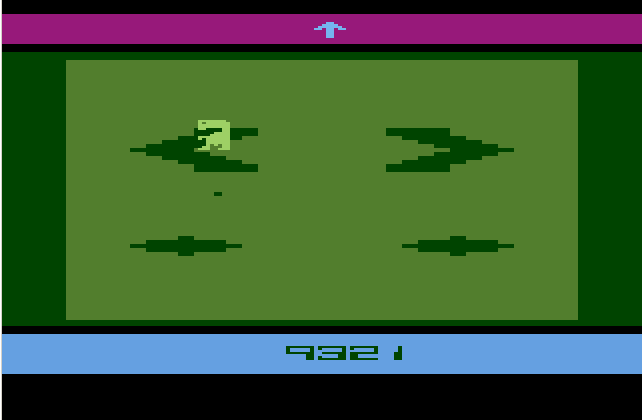 It’s nine years old, but I’m amazed by how few seem to know of these old projects that litter the internet, and this is one that’s definitely worth revisiting.

When people talk about reasons for the Great Game Crash of 1983 (which, it should be remembered, was mostly a crash in the U.S., other countries didn’t suffer much loss in popularity), one reason sometimes given was the lack of quality of one specific game: Howard Scott Warshaw’s E.T. The Extra-Terrestrial, for the Atari VCS/2600. (That’s not really the point of this post. For more of this, seen the Addendum, below.)

I should emphasize that it was easy to get frustrated by E.T. Its development was rushed so that it could be in stores in time for the 1982 Christmas season. Warshaw’s previous work Yars’ Revenge was a huge hit for Atari, but its successor, Raiders of the Lost Ark, is possibly a bit too experimental. I think E.T. is a better game than Raiders, it’s easier to learn certainly, but it has some definite issues that make it very frustrating to play.

There were a number of issues, but the biggest by far was that it was extremely easy to fall into the many pits that dotted the landscape of the game’s version of Earth, and after floating up out of one, it was just as easy to immediately fall back into one again. You could fall into a pit merely from changing screens in the wrong location.

Back in 2013, a user in the AtariAge forums using the handle recompile produced a hack to fix the game’s problems, including this one. They made a page that the hack from which could be downloaded, and explained, in great technical detail, how it had been made. The result has slightly worse graphics than the original, but is much more playable, and reveals that there is a very interesting game hidden beneath the rushed product mandated by Atari’s managers. Not only is the page and his work still up now, nine years later, but so is the AtariAge thread he made.

Remember: a delayed game is eventually good, but a bad game is bad until someone with enough time, energy and technical know-how takes it upon themselves to fix it, which in E.T.‘s case was about 31 years from its release.

Was E.T. the real reason for the U.S. crash? Honestly, I’m dubious. It’s likely a contributing factor, but a slight one. But the fact that it can’t be ruled out, and probably helped a little, makes it something that many writers can point to without much fear of contradiction. It’s the way many narratives are built.

But there were plenty of good games, by the standards of the time, to offset the fortunes of any single title. A more likely explanation was a deluge of bad games, and a market oversaturated by them produced by companies looking for a quick buck, so that unless a consumer had done their research, it was difficult to separate the worthwhile purchases from the cash grabs.

Video games had, almost overnight, turned into a billion-dollar business. For a few years, specifically 1978 to 1982, the success of arcades, and of the Atari VCS and a number of excellent games for it, tantalized a nation. For a brief period, almost everyone sold game cartridges. I remember seeing them on the racks of drug stores during that time.

Then, almost as suddenly as it had risen, it collapsed. No one knew which games were good and which were bad. Even the good ones were pretty expensive: a $30 game in 1982 was nearly $90 in today’s (2022) money. All of those stores that had jumped on the bandwagon were left with piles of unsold inventory. Console gaming died out almost completely for a few years, until the arrival of the NES, and some canny moves by Nintendo of America, resurrected the industry in the land of its birth.